“I don’t think that we ever were a total three-chord punk band. We perhaps started off like that but we always used to push the envelope musically. Our albums were always more melodic and musical than what you would class as an archetypal punk band.” Pauline Murray

Penetration’s 1st album ‘Moving Targets’ was a massive coming-together of punk promise and musical thrills. Unlike many of the punk-rush releases of 1978, many of the songs on ‘Moving Targets’ had musical depth, atmosphere, competence and a unique singer. Pauline Murray’s voice has a natural tunefulness that isn’t always present in other punkgirls of the time, but she still conveys the sense of urgency and powerfulness that makes it punk rather than straight rock. (Although some would say the 27 second guitar solo on Lover of Outrage goes beyond the rules of punk!)

Like many others, Pauline got into punk after seeing the emerging American talents at gigs: The Ramones, Blondie, The Runaways and Patti Smith all played gigs in Northern England, where the 14-year old Murray would attend with her older boyfriend.

” Some… had a very strange sound to it. I’d never heard a woman singing like, or looking like Patti Smith.” Pauline Murray

“Because there weren’t many punk bands around, we used to get offered all the supports up here…. we got a lot of exposure and a lot of experience. … The Stranglers rang us and asked us to support them at Newcastle City Hall- That was our second gig!” 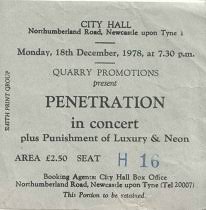 Two singles and the attention of Radio 1 DJ John Peel assured further attention and ‘Moving Targets’ was released to general acclaim, reaching number 13 in the 1978 NME critics’ chart. The first 15,000 were on luminous vinyl, although it apparently didn’t play as well as the normal version! The inclusion of two cover versions – Patti Smith’s Free Money and The Buzzcocks’ Nostalgia doesn’t make up for the fact that single ‘Don’t Dictate’ was absent. This was because proper punks believed that you shouldn’t have to pay twice for the same song – on 7″ and later on an LP. It seems a strange thought now…

Penetration only lasted until 1979 in this form, when Murray was only 23. The band and this release remain much-loved but constantly overlooked in their importance to punk music.

Pauline Murray and the boys – we salute you!

Our previous blogpost about Pauline Murray