In the Mark Smith interview and this one with Siouxsie Sioux, Gray is quite insightful in  pursuing the theme of longevity and how to survive long term as a punk, suggesting ‘bigger ideas’ like being an actress….

“Imagine 20 years of punk in the NME and they’re looking back – would you hate that?”

Muriel Gray originally did art school training in Glasgow, and her interest in The Arts has led to a range of TV and journalism work. She set up a Scottish TV production company and wrote some horror novels and a play, as well as taking on important public roles on the board of the British Museum, and as the chair of governors for the Glasgow School of Art.

She’s a keen user of social media; interacting with her followers and seeming to be an all-round lovely and very human person. On her fame she says,

“I’ve been on TV since I was 24 and recognised for most of my life, and had torrents of abuse. I once called U2 British by mistake and was sent a card with used condoms used as the writing stapled on, telling me off.” 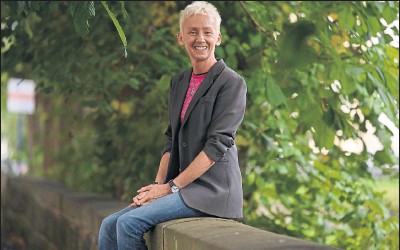 Although this is a fairly specialised off-topic video about the British Museum; the point is that a young working-class Scottish woman of Jewish descent has made it into some of the most influential and important national forums as a result of her involvement in punk rock 40 years ago. And that’s to be celebrated.

Muriel Gray, we salute you and your work. We hope to be able to meet you in 2019 and find out about the punk bit of your story that we’d all love to hear.

One of Muriel Gray’s great journalistic pieces for The Guardian:   https://www.theguardian.com/world/2002/aug/22/gender.uk