“The Shangri-Las were punk before punk existed. People thought we were tough,” – Mary Weiss 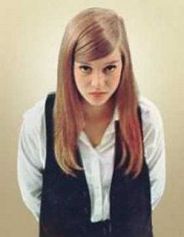 In 1962, and at the age of 14, Mary her sister Betty, and their High School friends the Ganser twins, Margie and Mary Ann set about forming a vocal group. Naming themselves after a well known local restaurant, The Shangri-Las signed with R&B label Red Bird Records – well sort of….technically as they were all still legally minors, it was actually their parents that signed their record deal. Often lumped in with the whole “girl group” genre, the Shangri-Las still stand apart, the Shangri-Las sang to a different beat.

Growing up in the working class district of Queens NY, the girls were already street savvy, and being so young they were also naturally fluent in the teen vernacular. They became an emblem of a new breed of tough, vulnerable, street wise teenage girls….and maybe boys too. 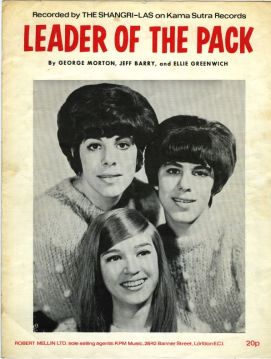 “Walking in the Sand” was their first single for Red Bird in 1964, and the group found immediate success amongst the equally angst ridden youth of the day. Whereas bands like their stable-mates the Dixie Cups were singing of “chapels” and “love” and the joy of finally getting married to the boy of their dreams, the Shangri-Las were far more inclined to pull on some leather boots and sing songs around the themes of longing, regret, abandonment and death.

Working with songwriters Jeff Barry and Ellie Greenwich, who already had song greatness under their belts with songs like “Be My Baby” (The Ronettes), and “Da Doo Ron Ron” (The Crystals), producer George “Shadow” Morton was tasked with coming up with a follow up single. Allegedly, “Shadow” left it to the morning of the recording to actually write the song, allegedly holing up in his shower with a bottle of champagne and two cigars, he wrote the idea in wax crayon on the cardboard packaging insert from his shirt before taking it to the studio. Like all great pop music, it was very professional.

Despite this very staged looking tv appearance – featuring the girls in their polite looking skirts, contrasted against the “bad” biker boy, the record was something of a watershed in teen tradgedy hit making. Girl meets boy, parents don’t like boy, girl breaks it off, boy is sad and heartbroken, then actually dies in road accident. The Drama!! 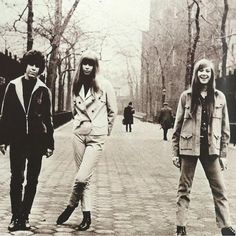 Unlike many of their contemporaries, the Shangri-Las were not the classic clean cut teenagers singing about their new pair of bobby sox or latest crush. The Shangri-Las posessed a darkness and a drama about them that groups like The Chiffons could only dream of. More comfortable in jeans and boots, and with a fluctuating line-up of either 3 or 4 members, The Shangri-Las opened for The Beatles, The Rolling Stones and even James Brown – who apparently after hearing their records had decided that they were black.

By 1968, the Shangri-Las called it a day due to exhaustion from touring and a whole heap of litigation that Mary still won’t talk about, which also prevented them recording for 10 years. Sitting out the whole post-Beatles, and mid seventies glam landscape, the S-Ls returned to working “normal” jobs, until that eventful summer of 1977…

In 1977, just as their decade of deafening silence came to an end, Mary and Betty Weiss and Margie Ganser went into the studio with Sire Records producer Andy Paley to record a new album. Even though the mooted album was never released, at the end of the sessions, they decided that they’d like to play the songs live, a one off gig, and where better to perform than at the local club CBGBs. Out came Andy’s phone book and a one off band materialised including Lenny Kaye, and Jay Dee Daugherty. More phone calls, this time to friends including Roberta Bayley, Lester Bangs, and Debbie Harry with the message “Tell everyone that you know”.

“The jukebox at CBGB had a lot of Shangri-La cuts on it,” says Weiss. “I was amazed. And I was deeply touched when Joey Ramone told me what a big influence we were on them.” – Mary Weiss

The Shangri-Las have been cited, covered and copied by everyone from Blondie, to Amy Winehouse, from The Ramones and Suzi Quatro to Bikini Kill and Tallulah Gosh.

We should probably finish this post now with an unexpected and dramatic twist…as the sound of keys being typed builds to a mighty clattering crescendo, the author, knowing that she has done her very best to do some kind of justice to possibly the greatest girl group all time, and with wreckless abandon suddenly starts typing so fast that she can no longer think or spell and then slips and crashes headlong into the oncoming computer keyboard…. look out, look out, look out.....fhgjjlj;”mIuyjKr&*%Tghkj,mnuguhhhhG!!

Mary Weiss released a solo album in 2007, and there’s more info on her website  HERE

And if you can spare half an hour, BBC sounds is still hosting a really touching interview with Mary Weiss, by Suzi Quatro herself HERE.

“It’s funny how no one thinks today’s artists are ‘tough.’ Now, you can be nude and swing on a wrecking ball and no one blinks an eye.” – Mary Weiss