There isn’t a lot of information about Magenta Devine online. When she died in March 2019, the media cobbled together little pieces that suggested she was ‘cool’ and a face of the late 1980’s ‘yoof’ TV. She was also defined by the men she’d worked alongside: Rock Family Trees’ Pete Frame (who created the pen-name for her), shock-romantics Sigue Sigue Sputnik and those she’d interviewed along the way.

A little deeper digging reveals that Magenta (Born Kim Taylor) became a post-punk enabler. Coming from a well-off background in the home counties (her father owned a chain of toy/model shops and her mother was an ex-model), in 1977 she began writing for the Aylesbury music paper Roxette. This was that time when all established music – from John Otway’s local folk club to the Buckinghamshire prog-rock scene –  was given a resounding shake-up by punk. Hippy chick Kim Taylor transformed into Magenta Devine. A charismatic individualist, Magenta could also invite the in-crowd back to her parents’ enormous house. Her colleague on Roxette,  Kris Needs describes her well:

“Magenta Devine was Aylesbury’s most glamorous female at a time when most were dressed down in denim, sashaying to the bar of the Bell Hotel during Thursday folk nights in scanty, sparkling dresses, cigarette holder held elegantly aloft and hair dazzling with its latest colour.”

Magenta was apparently the first punk in town to see the Sex Pistols. Instinctively, she grasped the humour, the wind-ups and the outrage and applied that to her column recounting life in the music scene:

“Yes, kittie-puffs … it was rather surprising to see young punks like the Pistols, Clash and Heartbreakers LAUGHING at the bar … and terribly SWEET young men they are too, even if they don’t have any awe-inspiring things to say. I spend much of my time CHATTING to Angie Bowie.”

When Magenta moved to London, her fame and influence was assured when she bought Malcolm McLaren’s house in Pindock Mews, Maida Vale. These houses sell for around two million pounds nowadays. Devine started work as press officer for mainstream artists such as Thin Lizzy, Paul McCartney and Queen, but soon became a key influencer in the fortunes of her boyfriend’s new band. Tony James had been bass player with Generation X, but Magenta acted as publicist for  Sigue Sigue Sputnik as James & co launched onto the New Romantic scene with glamour and shock-value. 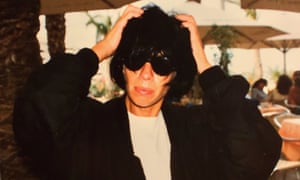 She became known for constantly wearing shades. Her reason?

“I only wore sunglasses because I hated messing about with eye makeup, I’m useless at it.”

Tony James has written a fascinating account of those days, including the links with the Sex Pistols.

“The bedroom where we lay contemplating the future, looked exactly as it had done when the former tenant, Sid Vicious had vacated it. Black floor, black carpet, black walls, black ceiling and black-out windows, let’s just say Sid had a problem with light and whatever else was going on with him, that kid certainly had style. Magenta and I found it womb-like and Sid’s lingering presence just added to the sense of rock and roll magic……. We started rehearsing in the sitting room of Magenta’s house. I felt that Sid Vicious had left a lot of vibes in that house, God, three people had died there and Thunders, Nolan and Steve Jones still all stayed there on and off at that time. This was becoming Rock and Roll holy ground and we absorbed and were absorbing that history.”    http://www.sputnikworld.com/The_Sputnik_Story.html

In 1983, Magenta Devine and the Sputnik boys played parts in Joe Strummer’s 16mm black and white gangster parody film, Hell W10. The film was thought to have been lost, but it reappeared, and Don Letts made a version with The Clash songs as soundtrack.

By the mid 80s, Magenta Devine started doing TV work including some important interviews. The Irish Times is spot-on when it says that Devine interviews ‘punk anti-heroes such as the former Sex Pistol John Lydon – not as an acolyte, but as an equal.’

And this recording shows her getting to the heart of the man, whether it is calling out Lydon’s approach to journalists: ‘winding everyone up’, pinpointing his contradictions, or needling him about his marriage to Nora Foster.

From the late 1980s, there were problems with addiction and her health. Magenta Devine died on 6th March 2019, but before that, she successfully moved into mainstream TV broadcasting, and became a campaigner and United Nations Goodwill Ambassador.

A punkgirldiaries salute to you, Magenta because you made things happen just by being there. Surely someone will be writing that book about you soon? Last word goes to Tony James:

“Mag was always such a STAR, it didn’t surprise me at all that she would go on to be a huge TV personality and I had wished her nothing but love and success when she left, but now I realised for the first time just how crucial she had been to everything, how much I had trusted her and how much I missed her measured input. I have never really given Magenta all the credit she deserves for what she did both for me and the band and I want to set that straight.”