It was not until 1986 that I first heard Bjork and The Sugarcubes, but her musical career goes back further than that, including being part of punk-influenced bands.

Following her parents split, Bjork was brought up in a bohemian commune in Iceland. Artists and musicians played a big part in her early life and she learned piano and flute at a local music school. Kate Bush was a favourite singer, and that influence can be seen in much of Bjork’s work.   Aged 11, her music school was featured on Iceland’s Radio 1, with Bjork singing a version of Tina Charles’ ‘I love to Love’, which gained her some attention.

After that, Bjork was offered a record deal by a label called Fálkkin. A number of older, established adult musicians (including step-dad Sævar Arnason) played on her first recordings that resulted in a 1977 album called Bjork. The sleeve was designed by Bjork’s mother and the songs included cover versions of Beatles and Stevie Wonder songs. 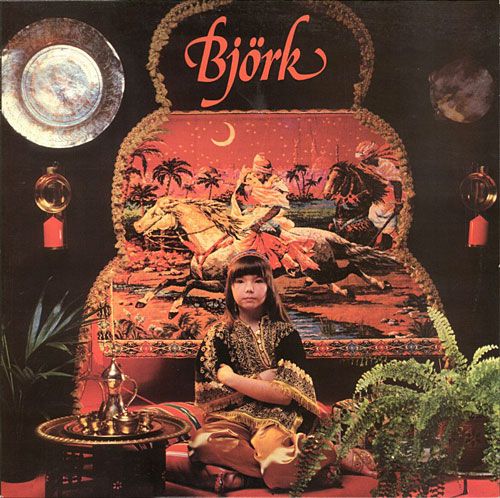 It’s not clear how popular this record was at the time. Iceland is a small place so it’s easier to make yourself known. It seems that the 11-year old Bjork continued at school and with family music-making until punk hit Iceland.

Bjork sees her next band – the all-female ‘Spit and Snot’ – as a punk band which she formed with people her own age and presumably had more control.

“I started a punk band when I was twelve ….Everyone was equal. .. I’ve worked with a lot of brilliant people who have taught me things  ….. girls having fun, and f**k that sitting-around-and-being-cute.”

Bjork was the drummer, with cropped orange hair and shaved eyebrows. There are no recordings or pictures of Spit and Snot, sadly.

Here’s the soundtrack album that goes with the classic 1982 Icelandic film ‘Rokk Í Reykjavík’. Commentators claim that this film was so influential that the whole Icelandic arts scene came alive following it, and that its influence can be seen today, with ex-punks having political power and forming many of the literary and music elites.

By 1983, Tappi split up, and Bjork’s global fame began in 1986 with The Sugarcubes, working with musicians from other Icelandic punk bands and Killing Joke’s singer Jaz Coleman. The rest of Bjork’s musical career is more well-known.

We at punkgirldiaries think that Bjork is a great innovator, female musician and ambassador for all good things Icelandic. We wonder what it was really like growing up in a musician-hippy commune and how much control and influence from her mum and step-dad there was in those early days. We’re angling for an interview, Bjork; will you talk to punkgirldiaries?

3 thoughts on “Bjork and the Icelandic Punk Scene”