Google punk drummers and you’re met with a photo roll of 50 punk drummers – all male. There are some really good videos; Topper Headon of The Clash showing his jazz tricks, Blondie’s Clem Burke being interviewed by Rhythm Magazine and a grown-up Rat Scabies twiddling round an extensive kit.

Many of the successful punk bands were held together by an experienced and musicianly drummer. But what about female drummers?

What’s so good about them, in our opinion,  is that many have been self-taught and have evolved different ways of playing that aren’t the same as the guys named above.

It all starts with Maureen (Moe) Tucker, the androgynous oh-so-cool drummer with the Velvet Underground. Playing with a simplified kit, standing up and using orchestral mallets rather than drum sticks, Tucker set the standard for many a post-punk indie band and showed girls that drumming could indeed be just hitting the things in a sparse and doomy way.

As punk exploded in the late 1970s and kids started forming bands, only a few female drummers became well-known and survived the pressures of gigging, recording and holding the sound of the band together. In the UK, take a bow, Palmolive and June Miles-Kingston.

In this 1977 recording of The Slits, you can hear the Mo-Tuckerish thwacking that was Palmolive’s trademark. The Slits later adopted Budgie as their drummer, enabling them to be edgy but tight. Palmolive took her sound to The Raincoats and the resulting first album is pure female brilliance with a rhythm that clatters along, continually falling over itself in an unselfconscious way. Pure bliss!

Miles-Kingston, like most of the US female drummers – Debbi Peterson, Gina Schock and Sandy West quickly became a competent player and was in demand for a range of post punk acts. This is to be admired and promoted; women should be professional drummers and play in all kinds of bands at the highest level. It’s just that we also have a liking for the shambolic and the amateur!

Years went by and eventually a new generation of self-taught punk girl drummers popped up. Some of them even stood up and bashed a minimalist kit; it challenges the guys; it’s great to watch and it’s no-nonsense. Howdy, Meg White and a whole crowd of new feminist bands. 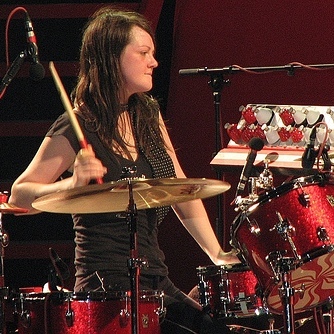 Tobi Vail, drummer with Bikin Kill, is credited with inventing the term (and spelling) of Riot Grrrl and has continued making music since her original recordings and gigs with Bikini Kill. The 1990’s movement is responsible for inspiring more girls to get involved in music – and that’s a good thing! 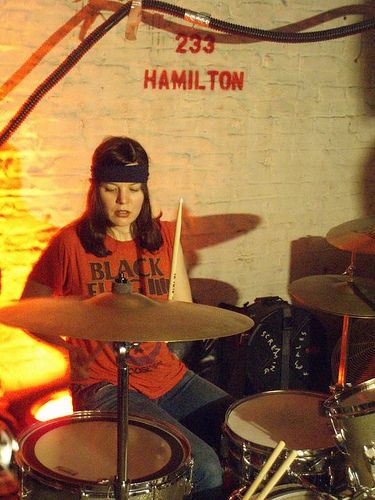 As Punkgirldiaries enters our 12th month of blogging, we want to show that the spirit, ethos, creativity and bloody-mindedness of punkgirl music has continued. To Tobi Vail, her predecessors and all those inspired by Bikini Kill, we take off our hats and give you a cheeky wink, before drumming our fingers in a Palmolive-style roll on the desk.