Two years ago, London barrister Lesley Woods said this to The Guardian newspaper:

“I still muck about with music, but I wished I’d paid more heed to that particular itch about five or 10 years ago. My work is so intense that it’s hard to fit music in now. I’ve been making new recordings and I still do the odd performance. I’d love to do some collaborations, though. It’s a bit lonely doing it on your own.”

This blog post is an unashamed call to Lesley Woods to join Polly and I to write, play and record some songs. Hope it works!

Lesley Woods, leader of  Au Pairs was one of my idols as a student bedroom guitarist. I saw them a few times in those bleak Yorkshire-Ripper times in Leeds and then later at the Princess Charlotte in Leicester, where it seemed like Lesley Woods wasn’t happy with the standard of hospitality and greenroom offered. I don’t blame her – it wasn’t called the ‘toilet circuit’ for nothing. 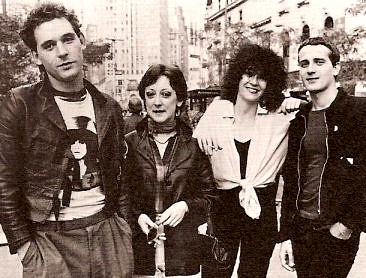 Where Siouxsie and Poly offered great inspiration for what girls could do, Au Pairs, like Delta 5 and the Gang of Four slotted straight in with my feminist leanings and the ideas that my Marxist lecturers were going on about. In retrospect, it was probably a smug and exclusive kind of scene, but me and my friends didn’t see it that way.

Au Pairs started off showing how men and women could co-exist, share roles and break up the old stereotypes. Visually, they were a delight and my on-stage guitarring tends to mimic the strutting up and down that was an Au Pairs speciality. All four members were bold, confident and assured of their position.

The feminist issues of the late ’70s and early ’80s were rooted in equal rights, fairness at work, household division of labour. Au Pairs had songs that provoked and considered political and sexual issues; they played benefit gigs and rallies; they spoke out in interviews and they seemed to live the ideology. Their first album ‘Playing With a Different Sex’ was knowing and confrontational, whilst at the same time having great rhythmic zest.

By 1983, it was a different climate and Au Pairs had changed. A lot was made of Britain having a female prime minister in Margaret Thatcher; her landslide re-election somehow confirmed that women had ‘made it’, yet her politics ran counter to feminist principles. Confrontations with the coal miners, the arrival of cruise missiles and the start of NHS privatisation in cleaning contracts all began. Jeremy Corbyn was first elected as an MP and Au  Pairs split up.

Lesley Woods became a lawyer, working with refugees, on immigration and human rights. That’s a logical and worthwhile thing to do; much admiration goes out to Lesley tonight.

However, if you’ve got a spare weekend in December, Lesley – we will get the rehearsal room, the amps, the guitars. Just turn up with your notepad and we’ll do a one-off punkgirl blast!