There are lots of places where males jostle for dominance. Go down to any gym and you’ll see muscle-bound blokes flexing and heaving weights whilst more puny specimens (and women) gaze on, unable to compete. “I’m top dog around here”, the weights, bars and muscles proclaim.

And so it is with the soundcheck. Some people will tell you that soundchecking a band is a careful piece-by-piece construction to ensure that all instruments have clarity, depth and separation for the maximum appreciation of the audience. That’s not strictly true.

Soundchecks exist to humiliate and dominate lesser musicians. And particularly female musicians. Just think – at some of these venues, the sound guy (almost always a guy) works there 6-7 days a week, with the same equipment and often very similar kinds of bands. Why, then is every night’s set-up played like some kind of advanced surgery? You’re on stage at 11pm? Oh, well, you must turn up at 6pm for the soundcheck!

The sound engineer is often someone who is a better drummer/guitarist/banjo player than any of the mortals in the band – and the soundcheck provides a way of sneering at whoever dares to think they’re good enough to be in a band.

Here are some of the things that sound engineers say, predominently to female bands, but also any beginner-types of any kind –  along with their meanings:

“Is that all your gear?” – you haven’t got enough.

“Is this your PROLINE guitar amp?” – that’s a really crappy amp.

“Are you going to use all those toms?” – I know you can’t play properly.

“What kind of sound are you wanting?” – I bet you don’t even know the right words.

And then starts the stupid ritual that goes…

and the drummer is supposed to sit on their ‘throne’ (never a stool, mind) and go bop, bop, bop steadily with the bass drum pedal while Mr Cool twiddles the knobs to more or less where they were for that other band last night. There’s a game where you can be a loser by either:

a) not playing the bop bop bop for long enough and having to be told to do more, or

b) carrying on the bop bop bop long after the sound guy has been waving his arms telling you to stop. It’s all about communication, see?

Then there’s the same scenario for the snare, before asking you to play bass snare and hi- hat to get the levels right. Once you know what to do, it’s a doddle, but in 1978, I learned the hard way.

Another sound guy drum humiliation is to twiddle for ages, shake head, purse lips and stand in the hall with arms folded, ‘listening’. He might say a comment about ‘possibly tuning the drums?’ – again this implies you’re incompetent and your kit’s a pile of shit. As a punkgirl musician it’s hard to face this out; just think Mo Tucker.

The bass, then the guitars have to play on their own. What most boys do is to have a flashy piece that they save just for soundcheck so that it tells Mr Cool on the desk that you’re a real player and not to be messed with. As a girl, expect him to ask you to turn up, down, or ask precisely what level of reverb you need. And of course, he’ll question your tuning.

Alas, it’s then the time for the vocalist soundcheck. In my experience, sound guys aren’t competing with singers, they just like catching them out. You can expect to have the microphone stand left at a height that is 4 inches above the top of your head. Feedback howling around the room is dealt out liberally and somehow attributed to something you’re doing, and if you’re lucky to have monitor speakers to help you hear yourself sing or play, they will be just plain wrong. With female-led bands a lot more savvy these days, they usually know what to ask for, but it’s a continual round of “Can I have more vocals in the monitor please?” and the sound guy implying that to ask that is a sign of….. you guessed it! Incompetence! 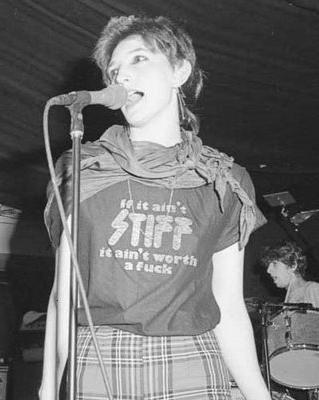 Yes, as punks we were incompetent, but spirit and innovation made for amazing music that has to be better than the Harry Wilson Blues Band…. surely.

So I’m sorry that the sound guys rarely seem to ‘get’ how to work with female-led bands. I’d love to know how many big venues employ female engineers these days. Has anything moved on? … please let us know!