When you think about a classic punk girl style icon, who’s possibly the first one that comes to mind? 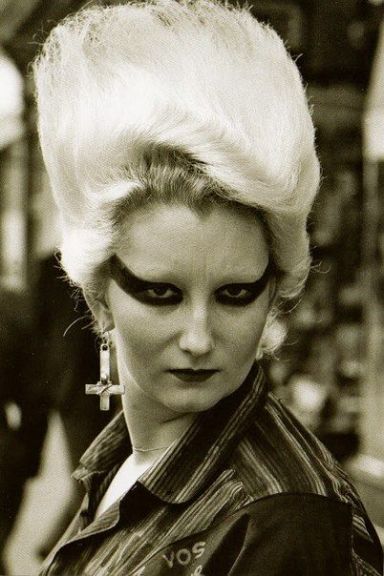 At the age of 14, Pamela Rooke re-branded herself simply as Jordan, “I truly felt like I’d been labelled the wrong thing, like a kind of name dysmorphia” she told Dazed magazine in 2016. Her self-made aesthetic became iconic; with her racoon eyes and bleached blond hair, there was already something of the Viv Nicholson about her. Combined with vintage, handmade and S&M themed clothing, Jordan was causing a stir, even before she was associated with Punk. Working as an assistant at Malcolm and Vivienne’s “SEX” shop on the King’s Road in Chelsea, she was famously upgraded to a first class carriage by British Rail during her daily commute from East Sussex, when fellow travellers complained about her appearance,

“I commuted for about two years. I had some real bad dos on the train. I had tourists trying to pay me for my photo…worse than that, mothers saying that I’m upsetting their children and debauching them and how dare I get on a train looking like that. Somebody tried to throw me off the train one day, literally out the door, so British Rail told me to go sit in first class, get out of trouble”.

First arriving at 430 Kings Road in 1976 wearing a net skirt and gold stilettos, she was initially informed that the shop currently had no vacancies, so she hopped over to Knightsbridge and installed herself in the “Way In” the fashion department of high-end department store Harrods, before getting a phone-call from shop manager Michael Collins asking if, actually, she could come back to SEX. Of course she could.

“Michael simply said to me and Vivienne ‘Oh, she’s working for us’ and that was that. I don’t ever remember having an official interview with Vivienne, which is weird, isn’t it?”

If the Sex Pistols were the musical call to arms, then Jordan was the deafening siren of style, wearing a mix of vintage and Westwood, but always in a totally original way, Jordan was one of THE faces of punk.

During the filming of an early Sex Pistols appearance in 1976 on the Tony Wilson fronted TV show So It Goes, Jordan arrived as part of the Pistols entourage, and as usual she was dressed to impress. As a non-band member, she has described her role around the Pistols as being on hand to “mash things up a bit”, and even before the show was taped, Jordan was busying mashing it up in the basement of Granada TV. By refusing to take off the Nazi armband off her Westwood “Anarchy” shirt, filming for the show, was put on pause,

Jordan was a style completist. There was nothing random about her look, and being asked/told to adjust or redact any part of it, was to make that look no longer either valid or intelligible. Jordan has often been asked where her style originates, and has explained that her “look” was more of a “work of art” than just a straightforward rebellion, or purposeful provocation – quite simply she saw Punk as fashion, rather than just music .

“I hated all that spitting and violence. To me punk was a fashion statement and a rebellion against the mediocrity of the times.”

As well as becoming a manager and collaborator with an early Adam & The Ants, Jordan remained a fixture at SEX until about 1980.

Asked by Dazed about how she sees her style icon legacy she responded;

“I’ve sometimes felt uncomfortable with looking at myself in that way but sometimes also very touched, deeply touched, actually, in terms of how people have considered me to have helped them with in their lives in some way; people that have been genuinely very grateful for someone that they perceive as having been there at a time in their lives when they needed someone to bolster their confidence”.

Jordan’s appears at this year’s Louder Than Words event in November 2018.