Today is the 39th anniversary of the release of Cut – the debut album by The Slits. It’s a captivating and challenging album, although its groundbreaking status wasn’t appreciated at the time.

But down to business.

Record companies have a history of business, They make money and have a reputation for ‘ripping off’ bands – some more than others. Their business is futures-style gambling. Companies like EMI and Polydor would try to spot musical talent at an early stage. They’d hold meetings in board rooms to discuss the merits of Little Nigel and his Electric Guitar to work out whether it was worth investing. How many units could this shift? How many more units would it shift if we got in Stevie Wonder to produce it, and bought some airtime on US radio?

The Do It Yourself ethos of punk ripped into this corpulent market with the attitude that it wasn’t about big names, 7-minute guitar solos and 3 years to make an album. Little record companies got a boost in the late 70s and 80s and the majors had to rethink and try and get themselves a few punk style acts on their roster. For the kids on the street, there was definitely a hierarchy of record labels – which ones were ‘sound’, and which were nasty. Whilst all majors were, by definition ‘unsound’, companies like Virgin and Island Records were seen as being more worthy due to having a figurehead with a keen ear for good music.

The Slits signed to Chris Blackwell’s Island Records.  Blackwell had a history of smart dealing and a genuine love of music in its most diverse forms.  He had been successful in bringing recording to Jamaica, and then Jamaican music to the UK. By 1979, Island Records had made a lot of money from Bob Marley and the Wailers, had talent-spotted Roxy Music and King Crimson and saw the potential for The Slits to unite the punk sound and the dub reggae feel.

“I’ve signed this group and I don’t know what to do with them. It’s a girl group, a punk band.” He gave me some cassettes of them live and I thought: “Yeah, they certainly can play.” And I agreed to do the album.

For a young band, the details of the deal don’t seem important. You want to record, live a musician lifestyle and generally have a lot of fun. The contract is generally about paying out to a band in the early years – an advance, or a salary and then recouping that money plus expenses as the records sell. What bands don’t realise at the time is that they are paying by the hour for the studio, the ‘name’ producer, for every restaurant meal the crew have, for the advertisements, the aeroplanes, the salaries of the guitar tech, the driver, the green smarties…

This Guardian article about the recording of  ‘Cut’ suggests it was memorable in different ways:

“They weren’t good at reggae, but they were keen to learn….We were using a mixing desk that belonged to Jon Anderson of Yes. We weren’t supposed to be, but he was on tour. Ari carved on the desk: “Ari was here.” Dennis Bovell

“I’d only been playing for 18 months and was with these control freaks. I often went to bed in tears, wondering what humiliation waited for me the next day, what weaknesses would be revealed in my playing. When I was playing Newtown, they kept saying: “You’re not getting it.” By the end, I was so furious I just thrashed at the guitar and made strange noises. Over the intercom came: “That was fantastic!” Viv Albertine 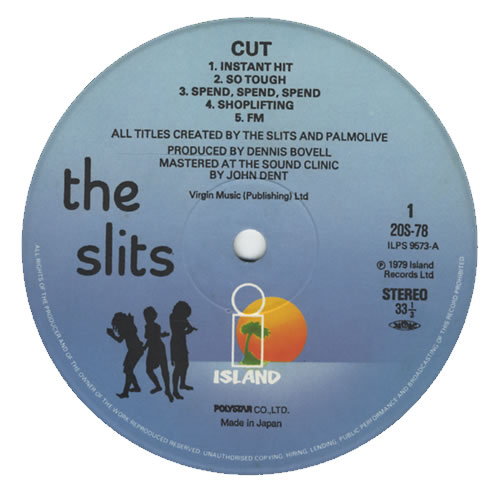 Presumably, after the release, The Slits were told that there was no payout because they had not yet ‘recouped’ Island Records’ investment. In the late 1980s, Island Records had financial difficulties and was taken over. The Slits still didn’t get any money when Island became part of Universal Music Group, who continued to put out the album on CD, digital formats and, in 2016, a vinyl re-release.

That’s when the issue of record companies not paying out to acts made Nottingham’s Uncensored! Punk Rock Radio Show start a petition on behalf of The Slits. The claim is that the band has repaid an alleged debt to Island many times over and should be receiving royalties. With over 8,000 signatures, we’re waiting to hear the outcome of this campaign that is presumably with the lawyers (aka incurring more debt).

Island Records, ‘how about writing off the Slits’ 40 yr debt to celebrate 40 yrs of punk!’ 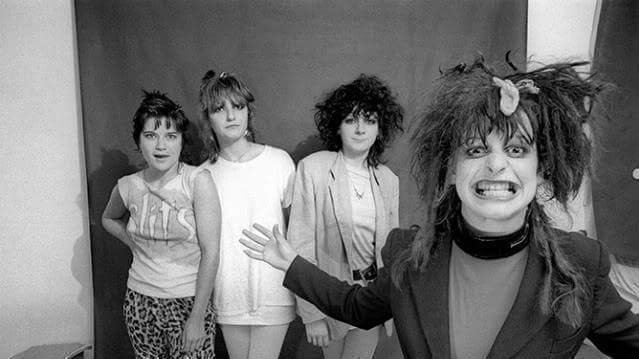 Punkgirldiaries would like to restate and support the case for The Slits receiving royalties. However many thousands – or hundreds of thousands – of pounds have been spent on the recording of the album, associated expenses and the pressing of vinyl, CD and now vinyl again, it is inconceivable that the 39 years of income from Cut does not entitle the band to their cut. Sadly too late for Ari Up, who died in 2010.