Whilst smash-it-up punk and do-it-yourself punk was the spark that got lots of us started in all this music obsession, I was also deeply influenced by the post-punk thinkers in the early 1980s. Being an ‘A’ Level student who’d just heard about philosophy, the existentialism of Robert Smith and the Marxism of the Gang of Four made me feel like I was in the know, as well as being incredibly cool. Described by Rolling Stone magazine as “probably the best politically motivated band in rock & roll,” the Gang of Four’s debut album, Entertainment! is consistently named in lists of the best punk albums of all time.

But then there’s the earnestness. I’ll own up – I was earnest, I was intellectually and politically fascinated by guys like Jon King and Andy Gill who could squeeze themes of alienation and situationism into the Gang of Four songs and still make you want to dance. But in real life, these grey-clad politico types were on hand with a theory to explain every teenage heart-fluttering as simply an animal transaction.   I want to say I love the Gang of Four songs, but I should say that liking the band fulfilled a social need to be approved by my peers. There were also lots of blokes telling me to read feminist theory books which seems ‘problematic’ to use one of the favourite words of the genre.

Looking back, I missed out on some straightforward love, fun, adventures and silliness just because I liked the Gang of Four too much.

The question is, were the boys in the band as earnest and deadpan as everything suggests? They were certainly principled. When asked to perform ‘At Home he’s a Tourist’ on Top of the Pops, they refused to change their lyrics from ‘rubbers’ to ‘rubbish’ and the appearance was cancelled.

So where does Eddi Reader come in? In 1982, the band advertised for a backing singer to perform on The Old Grey Whistle Test and for their forthcoming UK tour. They needed shouty women with a bit of percussion thrashing to complete the live sound from their third album, ‘Songs of The Free’ 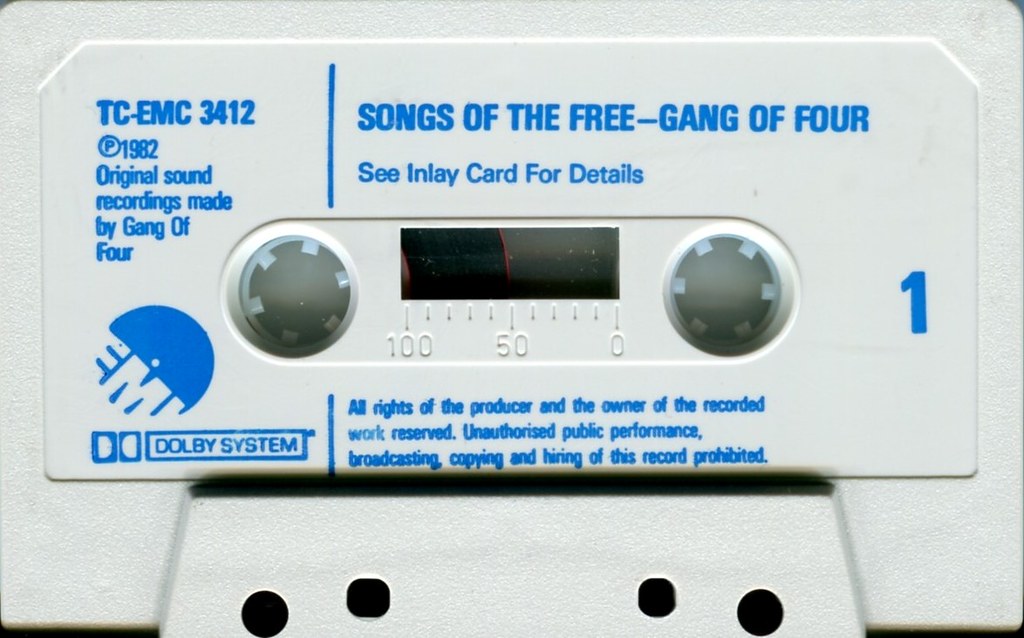 Eddi Reader’s early life included growing up in tenement slums and council estates in Glasgow as the oldest of seven children. At the age of ten, she started playing guitar in folk clubs and was soon seen busking in Glasgow and then performing circus skills around Europe.

So here’s a theory for the post-punk, post-Marxists amongst you who now draw a substantial salary: My proposition is that if, like Eddi (Sadenia) Reader,  you grow up in a rumbustious big family with little money and have a desire to see the world, the last thing you’d want is to spend time with a bunch of self-righteous 1980s Marxists. I have no idea what Andy and Jon were like; who knows what Sara Lee added to the mix when she joined on bass, but Eddi Reader didn’t stay long as backing singer – she was too smiley, and so fitted in much better with Annie Lennox and Alison Moyet.

There are websites like songmeanings where people (sounding very much like the 1980s student version of myself) pitch in with views on the meaning of band lyrics, and this song is ripe for interpretation:

“We live as we dream — alone.” is a line from Joseph Conrad’s “Heart of Darkness.”

Marlow is attempting to relate his experience in Africa to his shipmates, but remarks that he might as well be recalling a dream, because they’ll never be quite able to understand how he felt at that particular time. His own experiences were as uncommunicable as what a dream means to the individual who had it. Hence, “We live as we dream, alone.”

Who would have thought it’d sound so great sung by Gang of Four?

or what about this one:

The key line is:

“The space between our work and its product”

This song is about Marx’s alienation theory.

We’re following Eddi Reader on Twitter now. She tweets loads of political views and is obviously a super-clever and talented woman, with an MBE awarded in 2006. She’s got strong views but she’s got humour and emotion too. We hope she’ll talk with punkgirldiaries some day soon!