How did the punk bands learn how to play punk….before punk was invented? I thought that maybe the people in the bands were either just born with the ability to play chord shapes, or maybe everyone did this kind of thing when they were starting off. They plunked along with something until they somehow got better, but if I was plunking to them…what on earth did they plunk along to?

As well as trying to cope with Punk and Post punk’s ever expanding array of bands, songs, movements and twists in the plot, by the early 1980s we were also juggling with the many Punk and Post Punk influences, which were regularly name checked by artists in the columns of the music papers such as the NME’s “Portrait of the Artist as a Consumer”. 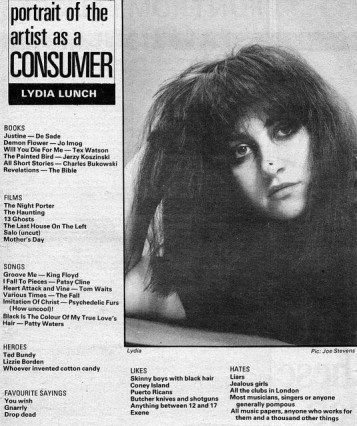 This was the place where bands or artists would set out their stall, naming their favourite books, records, films, food etc… for all to stare and wonder at. I wondered how come they all knew so much about old bands and books? I thought that being in a band was supposed to be so all consuming, that you weren’t supposed to have time to read books or keep up to date with the latest cinema releases as well.
The column soon became one of my favourite reads, and I was suddenly flooded with the names of all sorts of bands, actors, films and books that I had mostly never even heard of, but they had almost all come highly recommended.
This new insight into what other people listened to, and in a way where Punk had come from, gave my Saturday trips to the second hand racks in the local record shop a whole new sense of purpose. Instead of just flicking straight past records that I didn’t already know, I’d pause and try to think if anyone had mentioned them. I picked up 13th Floor Elevators, Bob Dylan, and Scott Walker on one of these archeological expeditions.
Following their choices, was like some kind of new treasure hunt, like a trail of cultural breadcrumbs to be hunted down and tried on for size. Or just randomly quoted to sound clever.

Film favourites would often include A Clockwork Orange (even more cool because it was banned), Eraserhead, Some Like it Hot, or 2001 a Space Odyssey. Musicians who got a lot of mentions, seem obvious now, but at the time   artists like Iggy and the Stooges, Scott Walker, Captain Beefheart and The Velvet Underground, were all news to me. I had no clue how any of them actually sounded – but judging by their fan base, they seemed like essential listening.

After a while, it didn’t even matter that I hadn’t yet read the books, seen the films or heard the records, it was understanding the code that was important. The code of cool. Kerouac/Lynch/Kubrick were cool, and they would all have been good answers, as were Warhol, Pollock, Nietzsche, Plath, Nicholson, Hepburn, Conrad, Cash, Smith, and Reed.
I knew that Punk was always intended as a fresh start, a new generation with a blank canvas, and that was fine, but to suddenly find we also had grandparents, a family tree and a whole backstory, was kind of a relief.