“For me, Rock Against Racism was something that made me think about other people’s lives and struggles. At that time you only had to watch sitcoms to be aware [of racism] and I was attacked a couple of times as a child because I had an olive complexion. When I was at school the talk was of Paki bashing and queer bashing, so I was quite aware of racist skinhead talk.” Poly Styrene

Rock Against Racism was started as a response to musicians like Eric Clapton and David Bowie supporting the fascist and racist ideas that were promoted by the National Front in the UK in the late 1970s. Clapton and Bowie have since pleaded drink, drugs and general idiocy in their u-turns. But the original letter from photographer Red Saunders to the NME calls out Clapton for having built his career on Black music heritage yet using abusive terms and calling for repatriation.

It is hard to find any women who are named as being central to Rock Against Racism’s strategy or administration. The first gig  at the Princess Alice pub in East London featured jazz musician Carol Grimes, and the first mass rally included Poly Styrene performing with X-Ray Spex to 100,000 people .

Rock Against Racism worked with another organisation, the Anti Nazi League to directly oppose racist marches and meetings. Many of those involved had links to left wing organisations like the Socialist Workers Party (SWP) or International Socialists; organisations which did not recognise feminism as part of the class struggle. Indeed, it’s hard to tell whether women were there. Officers of the SWP have been accused of harassment and assault on women this decade; so backtracking to work out what female members or female partners of activists experienced forty years ago is hard to speculate.

The Anti-Nazi League got into trouble at the time for financial irregularities – supposedly passing on money to the SWP – and there was general infighting about which other causes to ally with. Bands like the Sex Pistols had always been expressly anti-racist, yet they refused to perform at the RAR events because ‘it was a front for the SWP’. 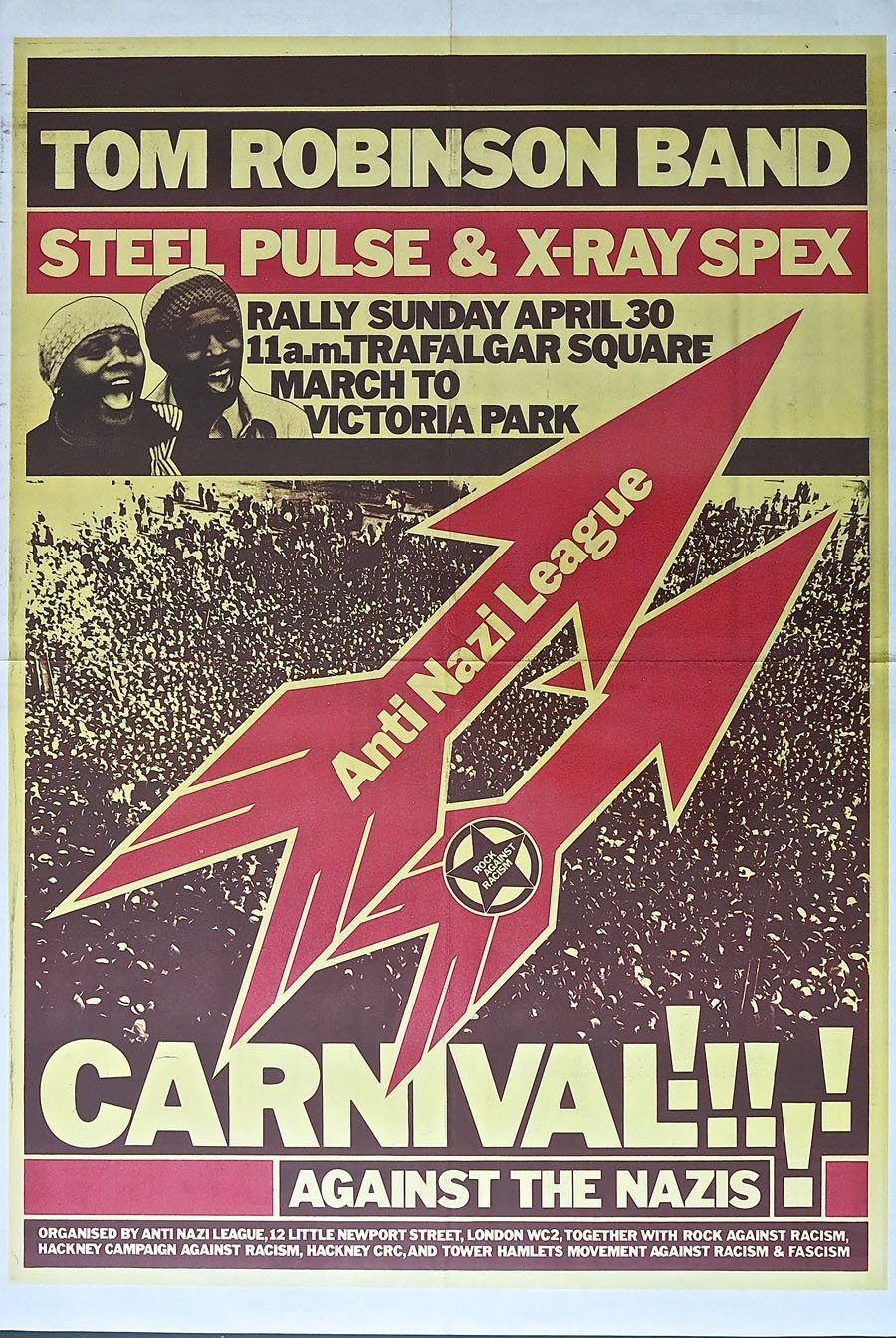 But the excitement and feeling of making a difference was palpable to anyone who attended any of the RAR rallies and gigs. The movement made it uncool to be a racist and gave young people several years of  free mass gigs featuring great acts. Tom Robinson achieved musical success from his association with Rock Against Racism:

“The Tom Robinson Band was utterly unknown when I first heard about Rock Against Racism. I wrote to the PO box number in the Melody Maker and said, ‘I’m not anybody but count me in.’ The organisers were putting on grassroots gigs at that time, where black acts and white acts would play together and, as a point of general principle, the reggae act would always headline.

They made little kits that they sent out to people who wanted to put on a gig, explaining how to put it on and promote it, where to put the posters. And they made the point that you should always pay the artists. These were professional musicians and you should treat them as such – workers getting paid for their work. It gave you a feeling of respect and having been taken seriously. Tom Robinson

This excellent film includes different footage of performances, interviews and commentry on the emergence of Rock Against Racism:
Gurinder Chadha, the filmmaker behind ‘Bend it like Beckham’ was a young girl at the time, working in her parents’ South London shop.

“Being in a shop  we were very vulnerable because the next person who walked in could beat you up. I was really into RAR. When I heard about the carnival, I was determined to go, but my parents said there was no way. The whole of the park was jumping up and down to The Clash. It was an incredibly emotional moment because, for the first time, I felt surrounded by people on my side. That was when I thought that something had changed in Britain for ever. Before RAR, there was no sense that it wasn’t OK to be racist. But with RAR, we got to see that there were others willing to speak out against racism and talk about a different kind of Britain.”

3 thoughts on “What was punk against? #4 Racism”