In the early 1970s, Saturday morning TV was dominated by cartoons. Most of them were American, and nearly all of them were produced by Hanna Barbera. These included The Funky Phantom, Help! It’s the Hair Bear Bunch, and the colourful pre-cursor to Scooby-Doo, Josie and the Pussycats.

First broadcast in 1970, the lyrics to the theme song already sound like an upbeat punk girl manifesto, “Josie and the Pussycats, Long tails and ears for hats, Guitars and sharps and flats, Neat, sweet, a groovy song, You’re invited, come along!” 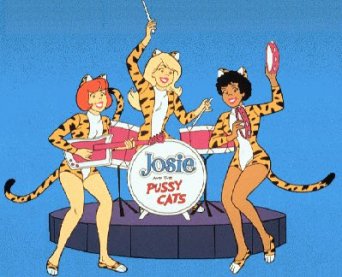 To avid TV viewers like ourselves, the concept of a cartoon featuring girls in a band seemed perfectly normal. Josie and the Pussycats were going to tour the world, play their hit records to crowds of adoring fans, and have some interesting adventures along the way. What’s not to like? It even sounded like something we might do when we grew up. There was Josie who sang and played guitar, Valerie on Tambourine or Bass, and drummer Melody. A well as playing in a band, they spent their time between shows solving crimes and mysteries, always bringing the baddies to justice just in time to get to the show. On the downside, they were never seen rehearsing, buying batteries for their pedals, or taking two guitars and a bag of leads on the tube during rush-hour. 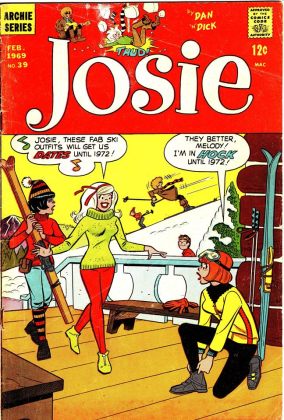 Trying to come up with a new idea for a cartoon series, Hanna Barbera  went back to Archie Comics, who had supplied the comic strip that led to the successful Archies TV show. Archie comics were currently running a series about a girl band, and so tasked by HB, the producers set about putting together a real life group to match the comic book templates, a band who would also record the songs.

After 500 auditions they cast Kathleen Dougherty as Josie, future Charlie’s Angel Cheryl Ladd as Melody, and Patrice Holloway as Valerie. When the producers presented their band to Hanna Barbera, the cartoon company immediately decided to re-cast Patrice Holloway, to make Josie and the Pussycats an all white trio. Producer Danny Janssen refused, and so a stand-off began. Hanna Barbera eventually backed down, and the character of Valerie became the first African American female in a major cartoon series.

Apparently, we’re not the only ones to cite the series as an influence. In 1995, on a compilation album called Saturday Morning Cartoons Greatest Hits, you’ll find The Ramones doing Spiderman, along with an all out rocking version of the aforementioned Josie theme by latter day punk girls Juliana Hatfield and Tanya Donelly.