If you were an informed young London art student hipster in 1976, then the Burchill and Parson era NME might have been one place to get all your Punk Rock news. The same could be said of early fanzines like Sniffin’ Glue…but what if you were only 12 in 1977, and hadn’t even heard of such things? I didn’t even know what a “fanzine” was at that point, let alone had the chance to read one? Stuck out in the provinces, and occupying the hormonal hinterland between childhood and full blown teenage rampager, we probably shouldn’t have even heard of Punk Rock at all. So how come we knew so much about it? 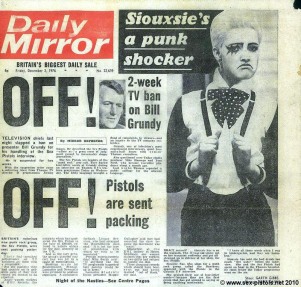 As luck would have it, the old school Fleet Street tabloids were straight on the case, with their moral high-grounding opinions on the emergence of this new shocking youth culture. And whilst they could have just as easily reported on exactly the same things and then buried it all on the bottom of page 16 (other down pages are available), instead they chose, more often than not to splash it right across the front, with suitably cardiac inducing headlines. You didn’t even have to buy the paper to see what was happening – it was all there on the news-stands, thank-you tabloids. 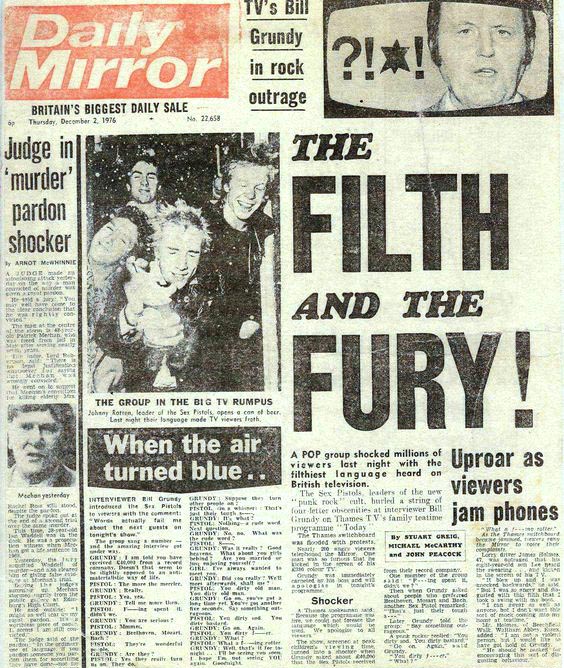 As barely teenagers, we were more intrigued than shocked by these headlines, and this level of national press coverage just served to wake us up and sharpen our appetite. Maybe, in retrospect that was the point? After the Sex Pistols appeared on the tea-time Bill Grundy Today Show, The Mirror ran with the now classic headline, “The Filth & The Fury”. The article replayed the TV interview and then backed up it’s own outrage by telling us that a lorry driver has been so incensed by what he saw, and the swear words he had heard that at the end of the show, he kicked in the screen of his own TV. It was like the world had gone mad. The lorry driver in question was of course billed as the right minded everyman in all this, and The Pistols were cast as the super-sweary villains of the piece. 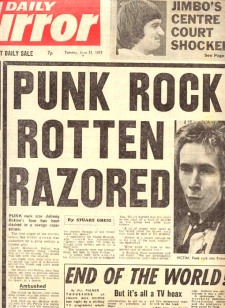 The tabloids love/hate relationship with the punks squared up something like this; the editors knew that Punk Rock sold copies, the more outrageous the story the better, this was then juxtaposed with their own finger-pointing and tutting at all the things wrong with this new youth trend. However it was worded, it was practically a training manual for provincial tweenies like us. They gave us names, places, and photographs in an easily available format.

Despite the attempt at negative coverage, these kind of stories just threw more petrol onto the sparks, and without the wave of publicity in the national Press, Punk, on the scale that it quickly reached, may never have happened at all.