Seven years ago today, on the 25th April 2011, we said goodbye to one of the most influential punk girls on the planet.
Marianne Joan Elliott-Said, grew up in Brixton during the 1960s. At the age of 15, she ran away from home, hitch-hiking from one music festival to another, only returning when she stepped on a rusty nail and had to be treated for septacemia.
On her 19th birthday, on the 3rd July 1976 she saw the Sex Pistols play on the pier in the south coast seaside resort of Hastings…and like so many others, nothing would ever be the same again.

“They had drainpipes, shortish hair, and played covers. But they must have had something because I thought, ‘I can do that!” she told The Guardian newspaper in March 2011.
Poly Styrene is a major punk girl figurehead, she blazed the trail that so many of us would follow, but none would do it quite like she did. Poly provided the inspiration to say what you felt, wear what you liked and to become who you were.

“Little girls should been seen and not heard… but I say Oh Bondage, Up Yours!”

X-Ray Spex were one of the most original of the early Punk bands, and Poly’s lyrics reflected her unique take on the brash and brightly coloured, disposable, and consumerist world that the late 70s had become. She wrote songs with the kind of titles that worked just as well as slogans “I am a Cliche”, “I am a Poseur”, and an LP title that itself sounded like a futuristic product name in “Germ Free Adolescents”. By 1978 Poly had taken consumerist culture by the throat, and she openly targeted society’s ever increasing reliance on plastic materials “Plastic Bag”. Poly saw the same qualities or lack thereof, in a world fuelled only by mass production and mass consumption, which she saw reflected in people’s unoriginal, factory-farmed, copy-cat behaviour. Mass production, the use of chemicals, and the underlying herd mentality were all targets for Poly’s lyrical missiles. In 1994 the Guinness Encyclopedia of Popular Music named Germfree Adolescents as the eighth best punk album of all time. 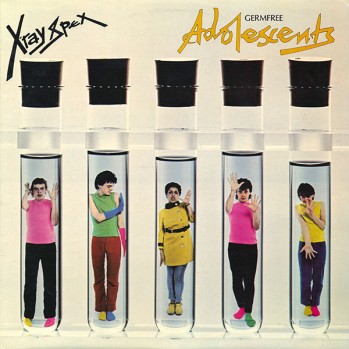 Writer Robert Christgau, writing for NPR described Poly as a “Female in a male world, heavy in a skinny world, African in a white world, flaunting braces that looked like they could dent a lorry, she stood out as well for her fashion sense, which favored Day-Glo colors rather than basic black.”

As proto-punk girls, we were 12 years old in 1977, too young to go to The Roxy or the Kings Road, instead we only saw our new punk friends via the television or the music magazines. We watched and we learned from punk girls like Gaye Advert, who might have inspired us to pick up a guitar, Siouxsie Sioux who dripped both style and swagger, and Poly Styrene who threw a punk master class in speaking up, dressing up and not shutting up. Thanks Poly, we miss you.

3 thoughts on “The Day The World Turned Day-Glo”