I think we probably all have our own candidates in this particular category, but the one band who seem to have clocked up the most official nominations over the years, are an all female sister act from New Hampshire.

The Shaggs, comprised of the Wiggin sisters, Dot (vocals/lead guitar), Betty (vocals/rhythm guitar) and Helen (drums), who started playing in their hometown of Fremont, New Hampshire in the mid 1960s. Before The Shaggs, Fremont NH had only ever been notable for a couple of minor UFO sightings and an incident in August 1959 when a B-52 bomber crashed into the town’s Spruce Swamp, without, for the first time on record, actually killing anyone. The wreckage of the same B-52 is still on display in the town’s museum, should anyone wish to visit.

Dot, Betty and Helen, were groomed for pop stardom by their father Austin, who’s own Mother received news during a palm-reading session, that his daughters would form a popular music group and go on to be the biggest girl group in history. Austin, presumably wanting or believing this to be true, took the girls out of school, bought them some instruments and stumped up for music lessons. By all accounts Mr Wiggin was old fashioned and serious, and the girls were not allowed any of the the sort of off the leash freedom, that most teenagers were enjoying in the mid 1960s. Instead, he made them spend their days practicing their instruments and performing physical exercise routines, presumably to keep them in shape for any future Ed Sullivan Show appearances.

In an interview with Jon Ronson for BBC Radio 4 in 2011, the Wiggin sisters admitted that although they had been encouraged to form a band, they had never been asked if this was something that they actually wanted to do, and never having been to a dance or a rock concert themselves, they were pretty much inventing music from scratch. Austin himself named the band The Shaggs after the then-popular shag hair style, and with no school to go and encouraged by their father, the girls practiced all day, everyday, in their quest to become the most popular girl band in America. In 1968, and after 5 years of their full-on daily rehearsals, Austin deemed them to be ready, and used his life savings to book studio time for the girls to record their first, and only, album.
Arriving at Fleetwood studios with both parents in tow, the girls drew on their lack of experience with the outside world or how other bands sounded to record an album of  entirely unique music. It took them all day. 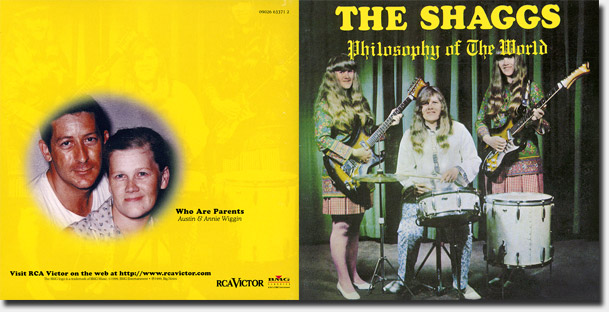 Titled “Philosophy of The World” approximately 100 copies were distributed to New England radio stations, before the rest of the 1,000 copies Austin had ordered, disappeared along with the man he had paid to press them. Despite all of this hard work, the palm reader’s stellar predictions, and the concerts Austin arranged at the Town Hall, the LP attracted no airplay and little if any attention. Once heard, the record seemed only to confirm the band as amateurish in the extreme, out of tune, out of time and way out of their depth. The band was ridiculed, and after the LPs release it seemed that their dreams of pop super-stardom were over forever, and after Austin’s death in 1973, seemingly with some relief, the girls hung up their instruments forever, never to play again.

In 1980 Terry Adams and Tom Ardolino of the band NRBQ heard “Philosophy of the World”, and instead of hearing discord and disorder, they heard songs written “outside of the normal process for songwriting”. Terry and Tom headed to New Hampshire to seek out the band, who were initially reluctant to even consider a proposed re-issue.

Even The Shaggs, it seems, weren’t exactly fans of The Shaggs.

The re-released, “Philosophy of the World” unexpectedly earned The Shaggs “Comeback of the Year” honours in Rolling Stone magazine. They were lauded by Frank Zappa, included in Kurt Cobain’s all time favourite 50 albums at No. 5, and Bonnie Raitt said they sounded like “castaways”.
It’s almost impossible to describe the music of The Shaggs; they don’t fit into any category, they’re not folk, they’re not rock, their songs don’t sound like any kind of pop music as we know it, they don’t have memorable choruses, the lyrics are hard to follow, and compared to almost any other band, they sound out of tune and out of time. However, it is these very qualities that continue to draw people to them, identifying The Shaggs as strangely pure, singular, and unfettered by rocks rules and influences. Possibly due to their isolation, The Shaggs reinvented pop music, and this is how it sounds. Now instead of discord, people hear honesty. The liner notes on the original album allude to exactly the same thing;

“The Shaggs are real, pure, unaffected by outside influences. Their music is different, it is theirs alone . . . you may love their music or you may not, but whatever you feel, at last you know you can listen to artists who are real. They will not change their music or style to meet the whims of a frustrated world.”

It sounds like a punk girl manifesto. No rules, no influences, take it or leave it.

Alongside the B-52, the Fremont Town Museum now houses an area dedicated to its own Rock and Roll heroes, namely The Shaggs.

Wikipedia search for “Worst band in the world” – The Shaggs are the first on the list.

5 thoughts on “The Worst Band in the World”